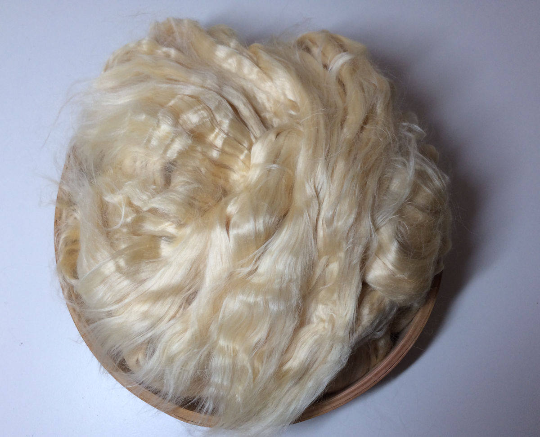 Soy Silk Soyabean Viscose Top Roving Vegan Spinning Fibre
Soya fibre production dates back to the 1930’s and 40’s and soy fabrics were introduced to the market by Henry Ford where a wool soya blend fabric was used in the upholstery of Ford cars.
Soya silk fibre is a protein fibre made from the by-product leftovers of soya milk. In a wet spinning process, the soya protein liquid is forced through a spinneret and cooled to produce yarn filaments.
Soya fiber also makes lovely and silky doll hair.

Soya fibre is quite slippery to spin, so is best spun with a tight twist. Soya singles can be plied with itself or with another yarn. Soya fibre can be carded and blended with other fibres, such as wool.

Soya silk fibre is a protein fibre made from the by-product leftovers of soya milk. This soya fibre is a staple (not a filament) and has lots of texture.

I now sell all Spin Flora vegan plant fibres through my Webshop at Paivatar.com.